peHUB » Doug Kilponen, Ben Smith: First They Ignore You, Then They Want To Buy You: Managing The Startup-Big Company Relationship

Every entrepreneur has met them. Big company executives with big company swagger. They ignore you. They dismiss the business problem you spent your life solving. They think they can crush you.

Then the tables turn. They push for strategic relationships. They want to give you money, frequently at irrationally high valuations. Finally they shell out enough scratch to buy you.

It is no easy task turning big company hesitation into commitment. But several key steps will help you manage this potentially make-it-or-break-it relationship. Through it all, be sure to drill into their heads every step of company progress as sales begin to multiply.

Managing a big company relationship is something we learned first hand at MerchantCircle. Our first executive-level meeting at IAC, with its more than 50 Internet brands including Citysearch, Ask.com, Urbanspoon and ServiceMagic, ended with the disturbing claim that merchant outreach wasn’t that important. Since merchant acquisition was core to MerchantCircle’s strategy, the statement was unsettling and a challenge. 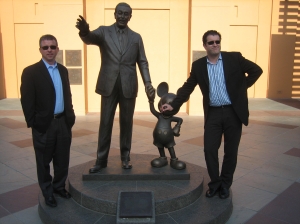 Ben and Doug at The Disney Studio’s

Within a few years and after a change in leadership, IAC became a MerchantCircle investor and internal boosters pushed for our acquisition.  By then we had business relationships with several IAC operations and developed the start of lifelong relationships with some of the most interesting people on the web: Kara Nortman and Rob Angel at CityGrid; Craig Smith at ServiceMagic; and Peter Horan, former head of IAC Media. Along the way we also had a chance to learn a few things from Barry Diller, IAC’s Chairman, and Tom McInerney, its CFO.

Many founders walk away from big company meetings convinced the executive behind the desk thinks they should abandon their crazy startup idea. If you really were a smart person and knew what Google, or IBM, or BankAmerica knew, you would seek a job just like his or hers!

This is nothing new. Just read the stories of Microsoft’s early dealings with IBM to understand how a corporate battleship believes it can nimbly defeat a software wannabe.

You shouldn’t let this dismissal turn into an ignore-the-big-company strategy. Given the importance of ecosystems such as Google’s, Apple’s, Cisco’s, or Facebook’s, such a move probably won’t work. The right answer lies in persistence and in convincing the larger entity that you’ve had the right answer all along.

We found the stages you will go through with big companies unfold something like this:

Here are some thoughts on how you can turn the experience in your favor:

If you keep at it and remain persistent, you are going to be there when strategic moves are required. But you need to be at the table through it all.

And, finally, remember to show sympathy for these guys. They may have laughed at you once or a dozen times. But they are the ones stuck in 18 meetings a week and filling out forms in triplicate to order coffee.  You’re doing what you love.

(Ben T. Smith IV (photo left) is a serial entrepreneur, investor and the co-founder of MerchantCircle.com and Spoke.com. Doug Kilponen (photo right)  is the former SVP of business development and customer acquisition at MerchantCircle.com. Ben and Doug worked together A.T. Kearney. Ben is available on Twitter @bentsmithfour.)

via peHUB » Doug Kilponen, Ben Smith: First They Ignore You, Then They Want To Buy You: Managing The Startup-Big Company Relationship.

A short video on building relationships with big companies

Founder of, investor in and advisor to technology and media companies
View all posts by Ben T. Smith, IV →
This entry was posted in Deals, Investments, MerchantCircle, Startups and tagged deal and no deal, deals, Disney, merchantcircle, Mergers, Startups, web entreprenuer. Bookmark the permalink.
%d bloggers like this: